https://jewishjournal.com/culture/arts/111794/Judy Taubes Sterman and Baruch StermanThe making of a memorable book requires the skills of an alchemist. Every author starts with the raw material of his or her own experience and expertise, but it can take a certain secret ingredient — passion, vision, inspiration — to transform the dross into gold. That is a fair description of what Baruch Sterman and Judy Taubes Sterman have accomplished in “The Rarest Blue: The Remarkable Story of an Ancient Color Lost to History and Rediscovered,” published last year by Lyons Press and reviewed in these pages on Dec. 21, 2012.

Because the Stermans possess precisely that alchemical genius, the Jewish Journal Book Prize for 2013 is awarded to “The Rarest Blue,” the second-annual prize given in recognition of a book of exceptional interest, achievement and significance.  This award is presented each January to an author or authors for a book published during the previous calendar year, and it includes a $1,000 honorarium.

“The Rarest Blue” starts with a 2,000-year-old mystery: How did the Israelites make thread a blue color known as tekhelet that they were required by the Torah to wear on their fringed garments? The formula for making the blue dye was lost in the early centuries of the Diaspora, and generation after generation of observant Jews have been unable to comply with the biblical commandment. “And now we have only white,” the compiler of the Midrash complained in the eighth century, “for tekhelet has been hidden.” Ironically, it was only during the era of the scientific and industrial revolution that the biblical secrets began to emerge. And now the Stermans have revealed how to make what they called “the sacred, rarest blue.” 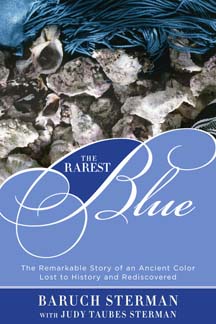 Significantly, Baruch Sterman holds a master’s degree in electrical engineering from Columbia and a doctorate in physics from Hebrew University in Jerusalem, and his day job is in the telecommunications industry in Israel. His real passion, however, is for putting the cutting-edge tools of science to work in solving an ancient scriptural riddle. Baruch’s wife and co-author, Judy Taubes Sterman, is both a yoga instructor and a teacher of biblical studies, and the couple live in Efrat with their seven children. Together, they created “The Rarest Blue.”

Clearly, these authors sympathize with the pious Jews who want to comply authentically with the biblical commandment: “To the ancient Israelites,” they write, the dyes that were used to create the color blue “possessed a holiness not by imperial fiat but because God Himself commanded their use in His worship.” But the pair also demonstrate a thoroughly modern sensibility when they show how the sciences of archaeology and chemistry were used to crack the secret of the ancient dye. Along the way, they allow the reader to see Jewish history and tradition in a new way, as they tell a rich and, literally, colorful story.

“The Rarest Blue” begins in distant antiquity, moves forward through two millennia of Jewish culture and history, and drills down deeply on the scientific enterprise of more recent times. The key to the riddle of tekhelet is a marine snail known as the Murex trunculus, whose entrails were used by Bible-era dye-makers to create the hyacinth blue that is mentioned some 50 times in the Tanakh.

“ ‘The Rarest Blue’ can be enjoyed as a mystery, a travelogue, an adventure story and a work of scholarship,” I wrote in my review for the Journal. “The story ends on a note of triumph that can be understood variously as an affirmation of piety or as the success of a scientific enterprise, or perhaps both.”

Other readers have been just as enthusiastic. Nobel Prize-winning chemist Roald Hoffmann calls the book “a detective story with cultural origins and a spiritual ending,” and Booklist describes it as an “expansive and fascinating microhistory.”  Perhaps the most astute and telling notice, however, came from the critic who hailed “The Rarest Blue” as an “Indiana Jones-style chemistry adventure.” Remarkably, it is one book combining chemistry and Torah that is a real page-turner.

The annual winner of the annual Jewish Journal Book Prize is selected by the Journal’s book editor. The prize is not restricted to Jewish authors or books on Jewish subjects, but “The Rarest Blue” is an example of a book that is worthy of attention both for its literary merit and for its Jewish interest.

Jonathan Kirsch, author and publishing attorney, is the book editor of the Jewish Journal. His next book is “The Short, Strange Life of Herschel Grynszpan: A Boy Avenger, a Nazi Diplomat, and a Murder in Paris,” which will be published in 2013 under the Liveright imprint of W. W. Norton to coincide with the 75th anniversary of Kristallnacht. Kirsch can be reached at books@jewishjournal.com.