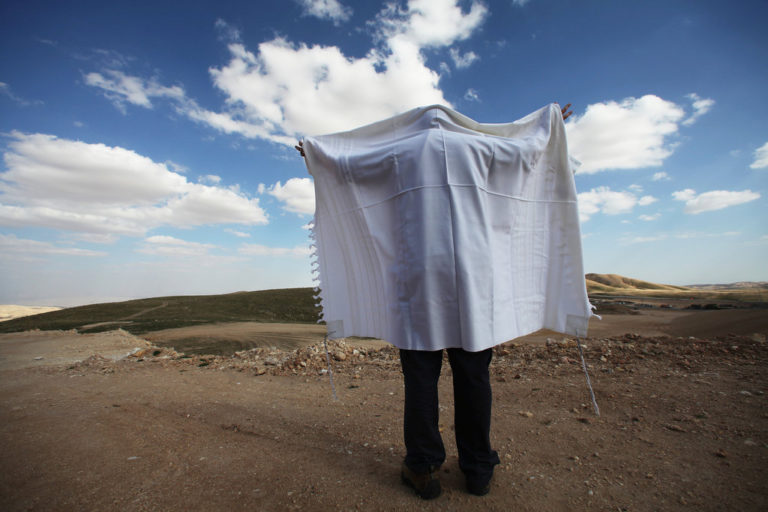 RAMAT GAN, Israel — One of the mysteries that scholars have puzzled over for centuries is the exact shade of blue represented by “tekhelet,” which the Bible mentions as the color of ceremonial robes donned by high priests and ritual prayer tassels worn by the common Israelite.

What was known about tekhelet (pronounced t-CHELL-et) was that the Talmud said it was produced from the secretion of the sea snail, which is still found on Israeli beaches.

Traditional interpretations have characterized tekhelet as a pure blue, symbolic of the heavens so that Jews would remember God. Not so, according to an Israeli scholar who has a new analysis: tekhelet appears to have been closer to a bluish purple.

The scholar, Zvi C. Koren, a professor specializing in the analytical chemistry of ancient colorants, says he has identified the first known physical sample of tekhelet in a tiny, 2,000-year-old patch of dyed fabric recovered from Masada, King Herod’s Judean Desert fortress, later the site of a mass suicide by Jewish zealots after a long standoff against the Romans.

“It really is majestic,” Dr. Koren said of the shade, which he said remained close to its original hue and appeared to be indigo.

Dr. Koren is scheduled to deliver a paper on Monday at a conference here at Shenkar College of Engineering and Design, where he heads the Edelstein Center for Analysis of Ancient Artifacts.

Dr. Koren, originally from Staten Island, described his work as “Indiana Jones meets C.S.I.” He said that when he first photographed the fabric scrap with the tekhelet dye, “the L.C.D. on my camera literally radiated.” 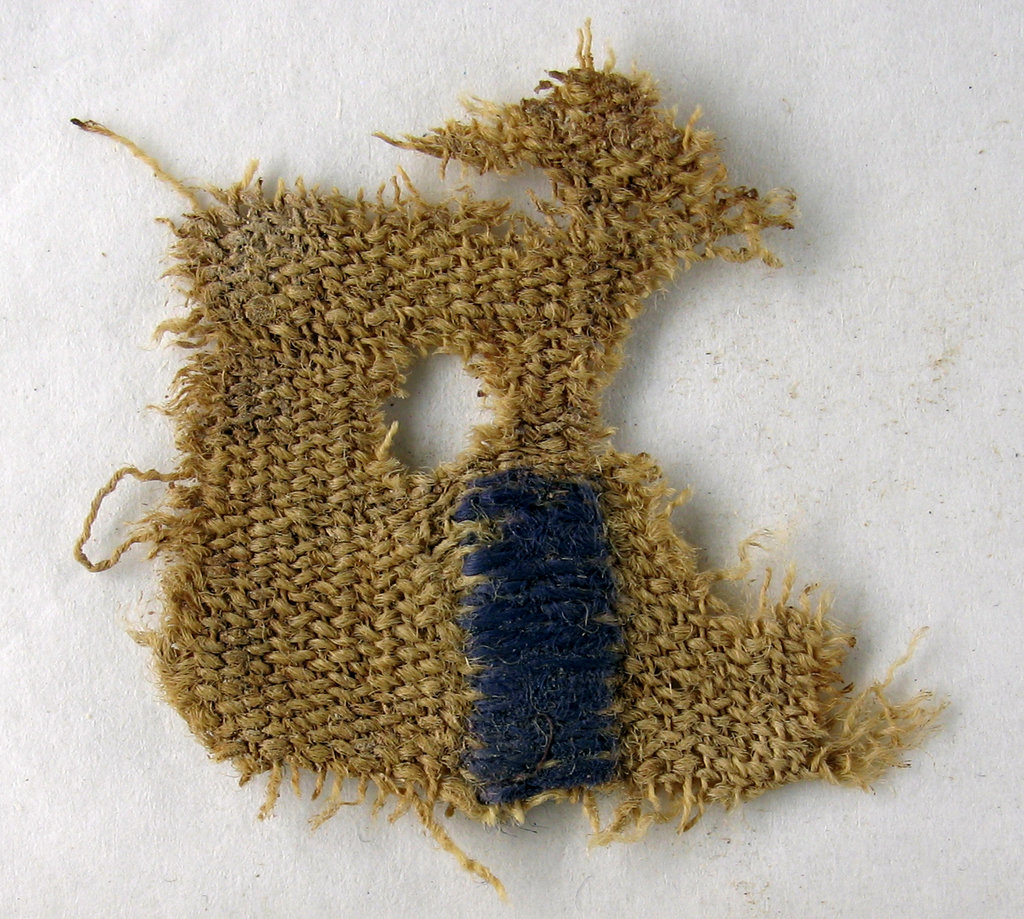 Though scientists and scholars are still debating the exact shade of the ritual blue, the dye used is modeled after a 2,000-year-old textile, above, and is produced from sea snails found in Israeli waters.Credit…Zvi Koren

Until now, the limited number of blue or purple dyes found on textiles from the period in this region have been derived from plant material, he said.

The fabric he examined was one of many items discovered at Masada in the 1960s and stored at Hebrew University in Jerusalem. It came to his attention when a British historian, Hero Granger-Taylor, who specializes in ancient weaves, asked him to analyze some textiles. Dr. Koren said he was the first researcher to make the connection between the fabric and the snail dye.

He found that the dye used in the Masada sample, a piece of bluish-purple yarn embroidery, came from a breed of Murex trunculus snail familiar to modern Israelis. Such shades on textiles are rare finds since they were typically worn exclusively by royalty or nobility.

Determining what exactly tekhelet would have looked like in its day has been the subject of conjecture and curiosity among rabbis, religious commentators and scientists for centuries; it is considered the most important of the three ritual colors cited in the Bible. The other two are argaman, a reddish purple, and shani, known as scarlet.

Some time after the Romans put down a Jewish uprising and destroyed the Second Temple in Jerusalem in A.D. 70, the knowledge of how to produce the tekhelet dye was lost. The dye was also prohibitively expensive to make: hundreds of snails were used to make even a small batch, and some in ancient times claimed it was worth 20 times its weight in gold.

The question of tekhelet’s appearance was later taken up by rabbinic scholars who had never seen it. Most of them settled on some form of blue, comparing it at various times to the color of the sea, the sky and sapphires.

Adding to the confusion, two of the most important Jewish authorities offered conflicting opinions: Maimonides, considered perhaps the greatest Jewish legal authority, said it resembled the color of the sky on a sunny day. But Rashi, another celebrated Middle Ages commentator, gave two different accounts: one, that it was green, and the other that it resembled a darkening evening sky. 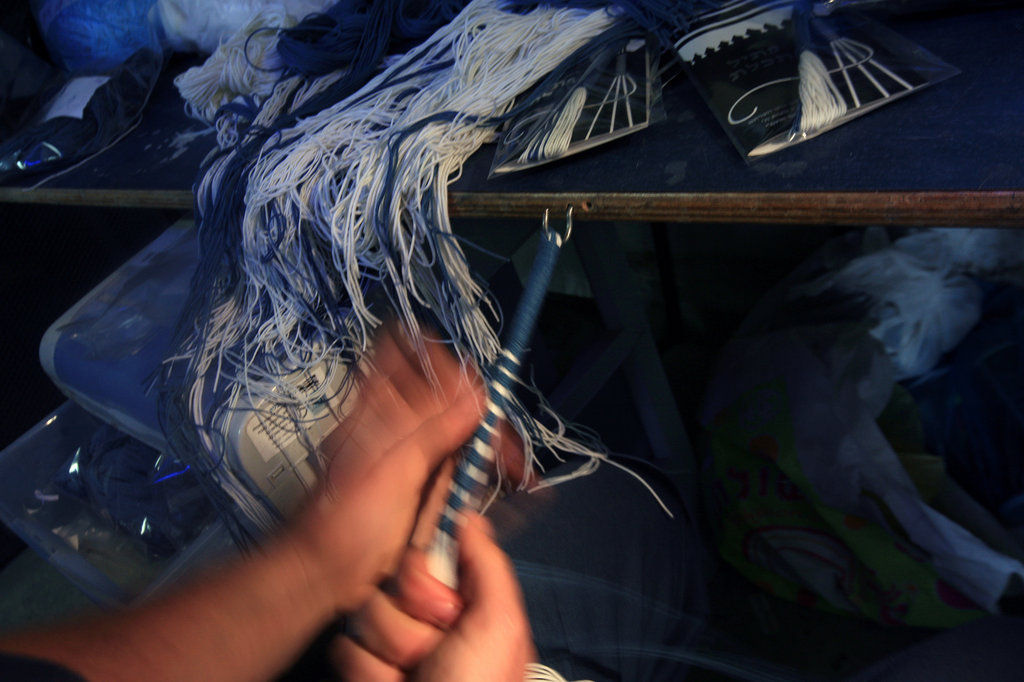 At a workshop in Kfar Adumim West Bank, a religious man ties dyed tassels to prayer shawls.Credit…Rina Castelnuovo for The New York Times

In modern Hebrew, “tekhelet” is the word for light blue, mirroring the consensus of scholars that the ancient color was most likely sky blue. The blue of the Israeli flag was inspired by tekhelet.

Because the textile from Masada was locally made from snails, and bluish, Dr. Koren concluded that it represented the first modern-day encounter with the authentic biblical tekhelet.

Even though it is not cerulean, Dr. Koren said, the traditional notion of tekhelet — meant to serve as a reminder of the heavens — still fits.

Twenty years ago, a nonprofit organization, P’til Tekhelet, which means “tekhelet string,” was formed to raise awareness of the color. Volunteer divers collect ink from snails off the coast of Israel and produce sky-blue tekhelet to dye string that is woven into the ritual prayer tassels known as tzitzit, hoping to reclaim an ancient tradition.

Baruch Sterman, a P’til Tekhelet founder, said that new scientific findings were unlikely to change the tradition his group had reintroduced: using the sky-blue color for ritual tassels.

“Probably in ancient times, what was most important to the Jews was that the color is a beautiful color and it comes from the snail,” Mr. Sterman said. “The minor distinction — sky blue, turquoise, lapis or purple blue — were probably not of significance to them.”

Yuval Sherlow, a prominent rabbi in Israel’s modern Orthodox circles — where wearing tekhelet in ritual fringes has become increasingly popular, as it has in American ones — agreed.

“Tradition is not so interested in science,” Mr. Sherlow said. “There is a type of denial of science and new information.”

An article on Feb. 28 about a scholar who said he had identified the precise shade of blue signified by the Biblical word “tekhelet” misstated the events of A.D. 70, after which the knowledge of how to produce the dye was lost. The Romans put down a Jewish uprising and destroyed the Second Temple in Jerusalem that year; they did not exile the Jews from Israel.

A version of this article appears in print on Feb. 28, 2011, Section A, Page 7 of the New York edition with the headline: Rediscovered, Ancient Color Is Reclaiming Israeli Interest.