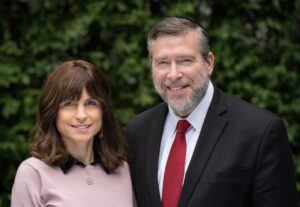 Rabbi Daniel Korobkin received his rabbinic ordination from Ner Israel Rabbinical College in Baltimore, where he studied Jewish law, ethics and philosophy. He received his Master of Arts degree in medieval Jewish and Islamic thought from UCLA’s Department of Near Eastern Languages and Cultures, and his Master of Science degree from the Johns Hopkins University School for Engineering at the Applied Physics Laboratory. He was an adjunct professor at Muhlenberg College.

Before moving to Canada in 2011, he was Rosh Kehilla of Yavneh in Los Angeles.He also provided synagogue services for the Orthodox Union’s entire west coast region. He has served as spiritual leader for Young Israel Synagogue of San Diego (where he was also the congregation’s founding rabbi) and for Congregation Sons of Israel in Allentown, PA. He is the author of the new translation of the classic philosophic work The Kuzari: In Defense of the Despised Faith. As of June 2019, Rabbi Korobkin is the president of the Rabbinical Council of America, having also served several other positions. He is the founder of the RCA’s Rabbis’ Forum, an exclusive listserv for Orthodox rabbis. Rabbi Korobkin serves the Toronto, Ontario area as a certified mohel.

(There aren’t clear photos of him wearing, but Rabbi Korobkin told me that he wears it. -RH)