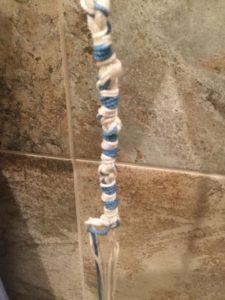 Received from someone who wishes to remain anonymous. To quote:

The idea is to:

(1) capture the nice symbolism R Aryeh Kaplan gives the Ashkenazi 7, 8, 11 and 13, the same groupings as the 39 melakhos; and as halachic argument

You will see that the Ashkenazi implementation of the Sifra’s 5 knots (plus Tzitzis=600 plus 8 strings equals 613) is fully there. Ignoring color, the windings are grouped by the knots in 7, 8, 11, and 13 windings.

Ignoring those knots for the moment, we have 13 Chulios of 3 windings. So far, this is the Baal haTanya’s compromise.

And besides, the majority opinion – including the Chinukh, Tosafos (and for Ashkenazim, we often pasken based on the idea that Tosafos themselves were Rov Rishonim), and the Gra – is that a Chuliah is a group of windings of a single color.

So, if you follow “the majority position,” and look only at the color of the windings, you will see 13 Chulios of three windings.

The idea is to:

(1) capture the nice symbolism R SR Hirsch (Collected Writings vol III) gave for Rambam strings;
(2) minimize risk of messing up what one could be doing with Lavan on the chance that we are wrong in the identification of the banded dye-murex (which taxonomists have re-labeled Hexaplex trunculus).

Rambam strings. Because R Hirsch and to make sure the only string that isn’t white and the color of the Beged is definitely being worn only to fill out the 8. For example, had one goes with the notion that Tosafos and Raavad were right, one would be harming the lavan half of the mitzvah.