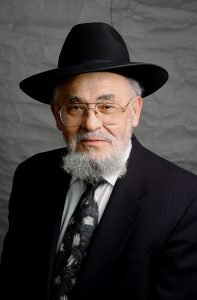 R’ Moshe David Tendler is the son-in-law of R’ Moshe Feinstein ZT”L, professor of biology/rosh yeshiva at YU, and medical expert. He is someone who goes “against the grain” in medical opinion (such as using a tube for Metzitzah b’Peh), and is one Rabbi who has visited the Temple Mount multiple times in the past. He has written pieces on Tekhelet himself, such as this one on Masorah.

R’ Tendler wears it Rambam ratio with Radzyn-Chabad tying style. R’ Schachter apparently called him out on this once as to why not wear two strings. He responded but I don’t know what the response was.