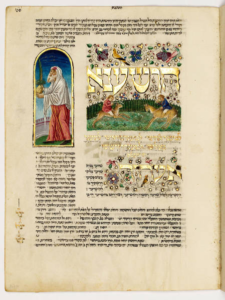 Summary: It seems that all depictions of tallitot in manuscript illuminations and paintings during the medieval and early modern era do not depict any stripes. It therefore seems that the stripes were introduced into the European Jewish world with the import of tallitot from various parts of the Ottoman Empire at the end of the early modern period.