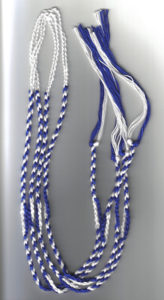 Karaite Sissith use equal partners of blue and white as thread groups. Considering that Karaites read the Torah literally, it’s curious as to why they don’t read Ptil as only one cord!

“During the Middle Ages, there was also plenty of cross-pollination (not to mention intermarriage)  between the 2 communities. The notion that the 2 communities developed completely independent of each other is a mistaken one. One common Rabbanite custom that possibly has its roots in Karaitism (according to some opinions), is holding (and kissing) ones sissith during keriath shema (see Beth Yosef on Tur, Orah Hayyimm simman 24, where he quotes the geonic sages Natronai and Moshe on this).”