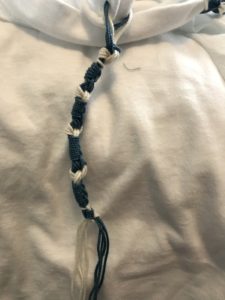 In his letter to R’ Hershel Schachter in 2009, he lists 9 points justifying his wearing his method. Points 1-5 state that the Radzyner and Shulchan Aruch HaRav are the “latest and greatest” authorities that use a traditional tying method still in practice (and has been for hundreds of years). Points 5-8 also, and that maintaining tradition without “sticking out” is also important. Point 9 was because his Rabbi told him to tie as such.

He also goes to town on R’ Schachter on mixing and matching 3 winds per chulya versus 7.

*** NOTE *** I found out that, if Lubavitchers, following Shulchan Aruch HaRav, were to wear Techeiles today, they likely would do the Rambam ratio, since the Alter Rebbe supposedly wrote this ratio for non-Chassidim as that’s the Halacha in the strictest sense. From a Chassidic/Kabbalastic perspective they go by the Rambam. The Zohar for example says one string since Bnei Yisrael took 7 days to cross the desert to reach the Yam Suf, and Techeiles is similar to the Yam. So on so forth.

From his response to R’ Hershel Schachter:

“It was very good for me to read that you require half of the threads to be tekhelet, and also that all the windings – except for the first and last – should be tekhelet, just as I have been practicing.

“In my Tallitot, I have been following the Shulhan Aruch HaRav and the Radjiner, with separate hulyot of three windings superimposed on the traditional 7-8-11-13 windings pattern between the knots. My reasons for doing so are as follows:

1. The Shulhan Aruch HaRav and the Radjiner are our latest authorities.

2. They were surely aware of all the previously proposed tying patterns, when they reached their decision. Their decision therefore implies rejection of the earlier patterns for practical usage.

3. The previously proposed tying patterns were purely theoretical, since no tekhelet was in use by then [Nignaz HaTekhelet].

4. The Shulchan Aruch HaRav and the Radjiner observed their tying pattern in practice, and are continued by their followers until today.

5. Preservation of the continuity of the traditional Shulkhan Arukh pattern of 7-8-11-13, which has been universally observed [by Ashkenazim] for hundreds of years.

6. Observance of the law of three windings per hulya as required for tekhelet, in addition to the 7-8-11-13 ruling of the Shulhan Arukh.

7. Maintenance of the continuity of the uniform observance of the 7-8-11-13 pattern in ALL tallitot, worn either with or without tekhelet. [Lo titgodedu?; Lo nitnu mitzvot ela letzaref bahem et habriot?]

9. Rabbi Levi Yitshak Halperin, Head of the Institute for Science and Halacha in Jerusalem, instructed me to use this pattern.”