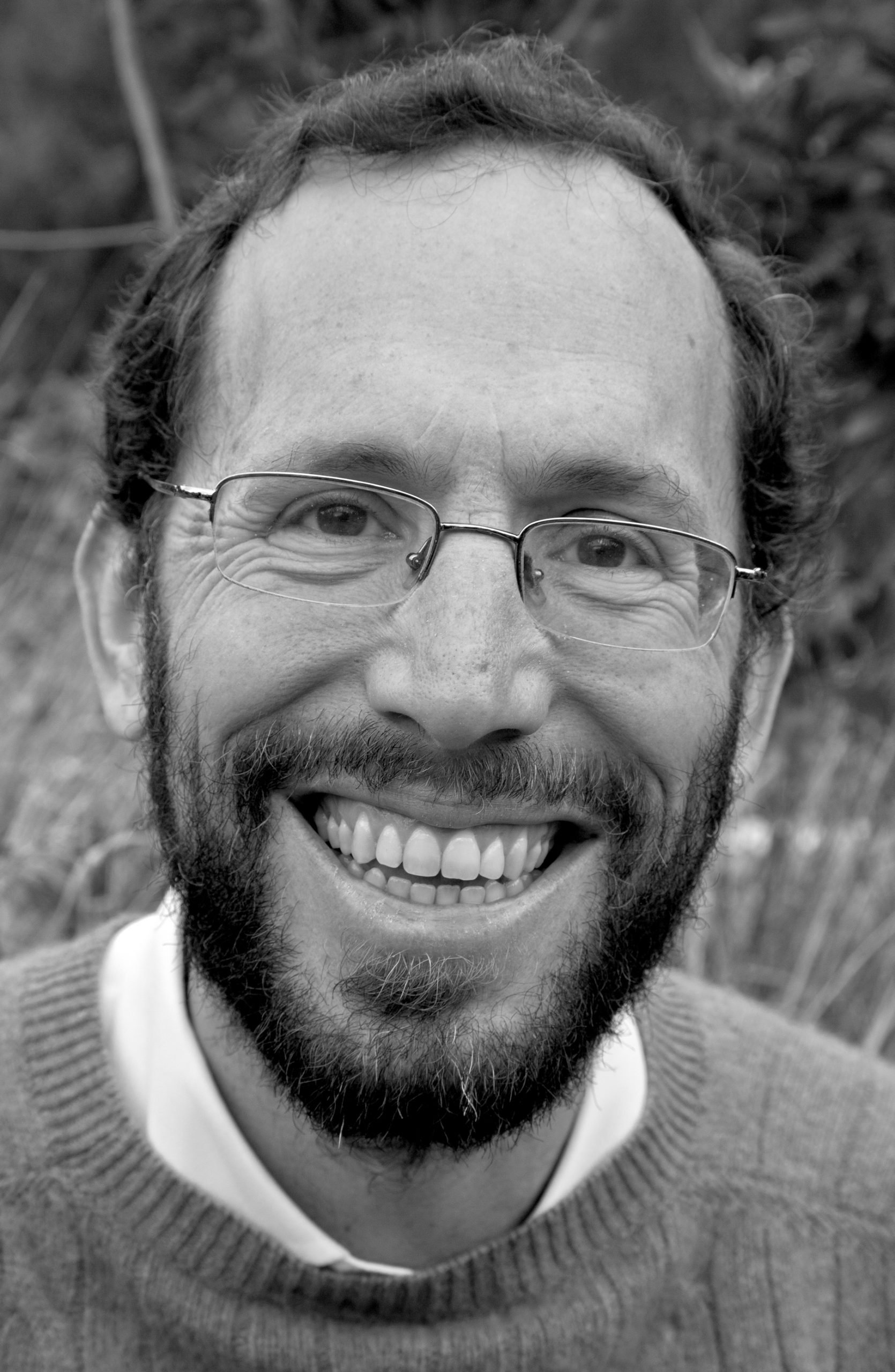 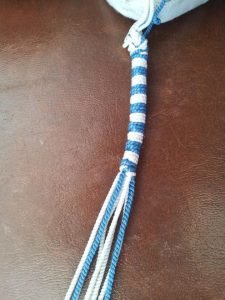 This is sort of a reverse Amram Gaon, where the first and last Chulyos are Techeiles, with one wind white before and after.

Bottom-line, his understanding is that the 7 Chulyos representing the 7 heavens should be the color blue, which is the color of the sky. That’s why he reverses the tying order.

The gemara (Menachot 39a) states that the threads of the tzitzit should be bound together by a number of bands, each band composed of three windings of one thread around the others. Immediately afterwards, the gemara quotes a beraita that states:

Most Rishonim understood that the beraita is discussing the number of bands needed to tie the threads together, and not the number of windings needed in each band. According to the beraita, the tassel should be tied together by no less than seven bands and no more than thirteen, each band made up of three windings.

The beraita explains its reasoning for the number seven by drawing a symbolic connection between the number of bands and the seven Heavens. The Rishonim quote another gemara (Menachot 43b) to explain this connection:

Specifically when we possess tekhelet, we must be prudent regarding the number of windings, as the tekhelet is clearly recognizable in the windings and is similar to the Heavens, while the white parallels the space between each of the Heavens. Now, however, when we do not possess the tekhelet, we need not be concerned regarding the number of windings.

According to the Rosh, the method used for winding the threads is only significant when tekhelet is used and the symbolism is complete. If one cannot accurately create a symbolic reflection of the seven Heavens because of the absence of tekhelet, the number of bands is insignificant.

Given that the symbolism of tekhelet is of prime importance in the performance of the halakha, it should also impact on the way used for winding the threads. The Rosh’s way of winding the thread calls for alternating tekhelet and white bands, while the Rambam holds that only the tekhelet thread is used for the windings.[5] The Rosh’s method allows us to recreate the symbolism of alternating Heavens and space described in the gemara, and would thus seem to be optimal.

But the method of winding ultimately suggested by the Rosh and Tosfot seems to violate this symbolism. Both the Rosh and the Tosfot hold that the first and last bands of the tassel should be wound specifically with white thread. Accordingly, a tzitzit with thirteen bands would inevitably have seven white bands and six tekhelet bands, upsetting the order of “Heavens” and “space” and destroying the symbolism recorded in the beraita!

This seeming contradiction to the original intention of the beraita is a result of the fact that both the Rosh and the Tosfot based their method on another beraita as well, which appears later on in the sugya in Menachot:

When he begins, he should being with white, so as to be similar to the color of the garment. When he concludes, it should be with white, because ma’alin ba-kodesh ve-ein moridin, we increase in holiness, and we do not detract from holiness.

It would seem that there is no way to bind the threads with thirteen bands while complying with the requirements of both beraittot; we can not maintain the symbolism of the first beraita while incorporating the requirements of the second. The Rosh and Tosfot were therefore forced to compromise between the two.

However, there may be an alternative method through which we can relieve the tension between these two apparently contradictory braittot. As noted above, the Rambam states that each band is wound with the tekhelet string, and the bands do not alternate between tekhelet and white, as the Rosh suggests. He therefore cannot explain the beraita calling to begin and conclude with white winding as demanding the creation of entirely white first and last bands. The Rambam must interpret the second beraita as referring merely to the first and last winding of the first and last bands respectively.[6]

In light of the Rambam’s interpretation of the beraita, we can create a method that upholds the requirements of both beraittot and maintains the symbolism of the “Heavens” and “space.” If we combine the positions of the Rosh and the Rambam, the tzitzit should be bound by alternating seven bands of tekhelet and six bands of white threads, as required by the first beraita, while the principle of beginning and finishing with white should be upheld by winding the first winding of the first band and the last winding of the last band with a white thread.

The Holiness of the Tekhelet and the White

This method of winding is not simply a technical compromise intended to relieve the tension between the two beraittot. It expresses a fundamental conception of the mitzva of tzitzit and the relationship between the tekhelet and the white strings, the result of which is a Halakhically and spiritually coherent method. In order to fully understand the depth of the new method and the way in which it blends the spiritual ideas found in each of the beraittot, we must engage in an in-depth analysis of the sources themselves and the tension between them.

I believe that the difference between the beraittot is not simply the result of a Halakhic dispute. Rather, each of the beraittot represents a different approach to understanding the relationship between the tekhelet and the white threads.

The first beraita represents a position that considers the tekhelet to be the essential color of the symbolic meaning of mitzvat tzitzit. The tekhelet reminds the beholder of the Heavens, and the white threads are simply there to represent the space between the seven Heavens. The source of this understanding can be found in the words of R. Meir (Menachot 43b):

Meir says: How is tekhelet different from all other colors? For tekhelet is similar to the sea and the sea is similar to the sky, and the sky to the Throne of Glory, as it says, “And under His feet was the likeness of sapphire brickwork, and it was like the essence of the heaven in purity” (Shemot 24:10), and it says, “Like the appearance of sapphire stone, the image of the throne” (Yechezkel 1:26).

As opposed to the preeminence attributed to the tekhelet by the first beraita and R. Meir, the second beraita emphasizes the importance of the white threads; the first and last band (or, according to the Rambam, the first and last winding) of each tzitzit must be made of white threads. The reasoning for this is “ma’alin ba-kodesh ve-ein moridin” – the order of the actions taken when fulfilling mitzvot must have an ascending progression of importance. Therefore, one must finish the winding with a white thread, and not a tekhelet one. Clearly, the second beraita considers the white threads and their windings to be more important than the tekhelet threads and windings.

In order to resolve this, we must broaden our study and examine texts that do not directly relate to the sugya of tzitzit.

Daniel describes his vision of God in the following manner:

I beheld till thrones were placed, and one that was ancient of days did sit. His raiment was as white snow, and the hair of His head like pure wool; His throne was fiery flames and the wheels thereof burning fire (Daniel 7:9).

In this verse, Daniel describes God as “ancient of days,” garbed in pure white cloths, and white of hair. Daniel’s vision is the basis for the Zohar’s position that the level of revelation called “Atikta Kadisha” is characterized by the color white.[7] According to the Zohar, other colors characterize lower levels of revelation. If so, white represents God in His most pure and revealed form, through which He guides and judges His creations.

The distinction created by the Zohar between white and other colors is rooted in the far more basic difference between white and tekhelet. The Zohar explains that tekhelet represents judgment, while white represents mercy. In that context, it seems that tekhelet represents a lower level of revelation, Sefirat Ha-Malchut, while white represents a higher level of revelation, Sefirat Ha-Chesed. Thus, the white strings are holier than those of tekhelet.

This mitzva of tzitzit includes blue and white, judgment and mercy, white fire that does not consume and blue that consumes and destroys… white from the right, blue from the left.[8]

The Zohar explains that tekhelet is connected with judgment through its similarity to the roots of the words “achal” and “kala,” which mean “to consume” and “ceased.” In fact, the midrash (Sifrei, Bamidbar 115) also presents the tekhelet as having a negative connotation by noting the similarity to the word “kilayon,” “destruction.”

These are simple linguistic similarities; however, we do find verses in the Torah that seem to relate to the dual symbolism created by the tekhelet and the white.

And it shall be unto you for a fringe, that you may look upon it, and remember all the commandments of the Lord and do them; and that you go not after your own heart and your own eyes, after which you use to go astray; that you may remember and do all My commandments, and be holy unto your God (Bamidbar 15:39-40).

Twice in three verses, we are commanded to remember and fulfill all the mitzvot. First, the negative result of forgetting the mitzvot is stressed:

Go not about after your own heart and your own eyes, after which you use to go astray…

In the second command, the Torah tells us to remember and uphold the mitzvot so that we can take part in the creation of a positive outcome:

That you may remember and do all my commandments and be holy unto your God.

According to the Zohar, it seems that these two dimensions of the mitzvot are symbolized by the different colors of the tzitzit. The tekhelet symbolizes the negative outcome created by violating the mitzvot, and the white represents the positive outcome of “be holy unto your God” that results from following them.