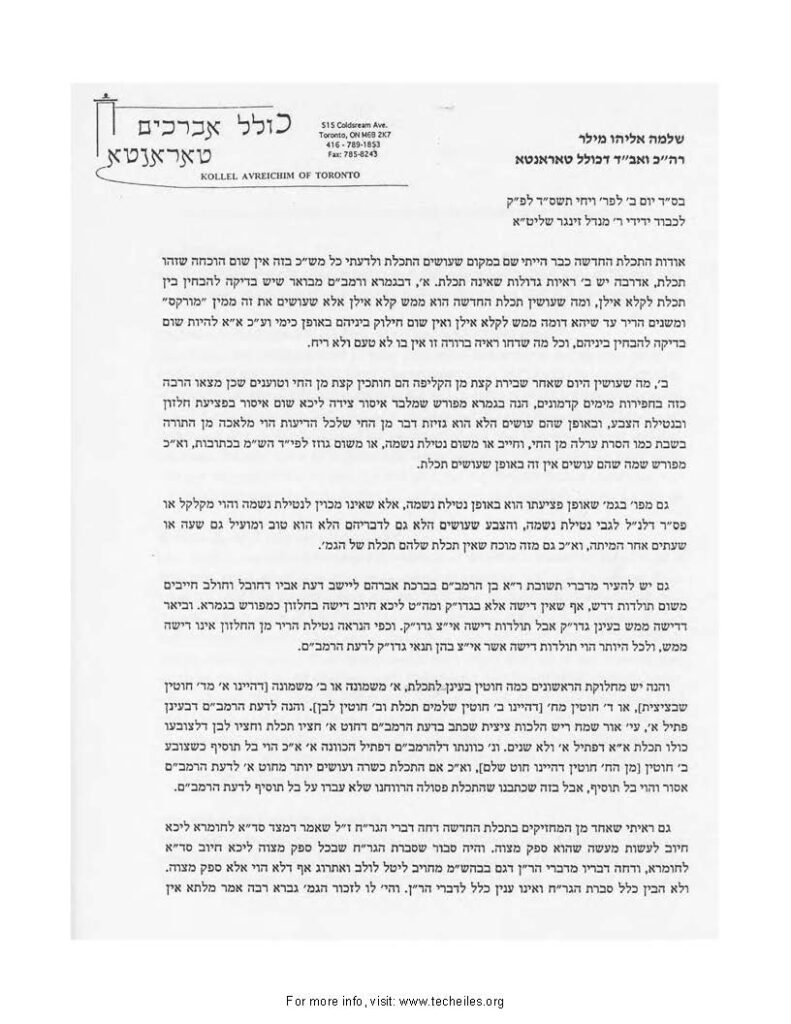 About the “new Techeiles,” I’ve already visited the place where they make the Techeiles, and it appears to me that from all that’s been written on this, there is no proof that this is Techeiles. Just the opposite, there are two big proofs that this isn’t Techeiles.

It’s also clear from the Gemara that the manner of Ptziya is the manner of killing, except one does not have intention, thereby making it Netilas Neshama, and it is either a destructive act or a  Psik Reisha deLo Nicha Lei (he is not interested in the inevitable consequence) regarding Netilas Neshama. he dye that’s produced, according to them  is useful after 1-2 hours after death, and if so this also is a proof that this isn’t the Techeiles of the Gemara.

I have also seen that one of the supporters  for the new Techeiles rejected the words of the (גר”ח) Gra”Ch (HaGaon R’ Chaim Soloveichik) ZT”L who said that from the perspective that Safek Mideoraissa Lechumra, there’s no obligation to do something that’s a Safek Mitzva. And he was of the opinion that, in every Safek Mitzva there’s no obligation with a Safek Mideoraissa Lechumra. And he refutes the Ran’s words, that also during Bein HaShmashos one is obligated to lift a Lulav and Esrog even if there’s only a Safek Mitzva. And R’ Chaim does not understood this Svara of the Ran at all. (והיה לו לזכור הגמרא “גברא רבה אמר אין מזניחין אותו”) And he should be  reminded of the Gemara which says a great man’s words there’s no neglecting/disregarding it. R’ Chaim’s Svara is with a Mitzva that’s Mechuyav in the Torah with a certainty, and there is a way for him to fulfill it in a doubtful manner, and after he will do so out of a Safek there still remains the fact he’s obligated in the matter based on the law of Safek Mideoraissa Lechumra. If so, he’s not obligated (מה”ת) Min HaTorah to do something that after even after fulfilling it the chiyuv to fulfill the mitzva still remains placed upon him And this doesn’t compare at all to the words of the Ran that Bein Hashmashos one was obligated out of a Safek and through his action he exempts himself from that  obligation and that obligation does not remain.

And the main point of R’ Chaim’s Svara is it appears that it depends on the disagreement from the Rambam and Rashba, if a sefek d’oraisa , (מה”ת) is Min HaTorah Lechumra or Miderabbanan LeChumra.  That according to the Rashba that Min HaTorah LeChumra. If so, if one places Safek in Techeiles in his Beged, still, he’s left with an obligation from a Torah Law , based on  Safek Mideoraissa LeChumra, and since he doesn’t exempt himself from a Tallis with a Safek of Techeiles, he isn’t required to place on his Beged a Safek Techeiles.  But, according to the Rambam, that in a sefek d’oraisa Min HaTorah you are lenient, if so, there is to say that through placing Safek Techeiles, will exempt your obligation Min HaTorah, and it’s good to say  that you are obligated Min HaTorah to put on a Safek Techeiles on your Beged to exempt you from your obligation to Techeiles on it.  And it’s known from Teshuvas HaRan in the Inyan of LeHatir Neder in bein Hashmashos of the day Chalos HaNeder (application of the Neder) that depends on aforementioned argument   that according to the Rashba that safek d’oraisa  Min HaTorah is LeChumra, already the Neder applied and you can be Matir it Min HaTorah, which is not so according to the Rambam who holds that Min HaTorah safek d’oraisa is  LeKula; if so, in Bein HaShmashos you’re still permitted Min HaTorah and if so, there’s no application (of the Neder) and it’s therefore impossible to still be Matir the Neder. But, the Chavos Daas in Siman 110 writes that the Rambam only held that safek d’oraisa from the Torah is l’kula is only by a Safek Issur, for the Torah obligation is only when it’s Vadai Assur, but regarding the fulfillment of a mitzva one is obligated to keep it in the manner of Vadai, and Safek Kiyum Mitzva, the Rambam also doesn’t fulfill one’s obligation . And if so, even to the opinion of the Rambam, if one places a Safek Techeiles, his Chiyuv min HaTorah still stands. And the Gaon R’ Chaim’s rule stands that one isn’t obligated to do something that even after one does it the obligation remains, and even though  there are proofs from a number of Poskin that don’t hold like R’ Chaim, such as the Admor of Radzyn Z”L who already ruled on this Svara, in any case the Ikkar of this Svara is a straight Svara, and it’s impossible to  simply reject it.

And regarding their claim that  they found Murex snails in diggings, it’s very possible that this was the color of Argaman which until 24 years ago they didn’t know that there was a way to change the color and make it pure Kala Ilan. If so, one can also say that in earlier times they did not know from this rather they  knew how to make a different color. And more specifically, that I already wrote that according to the proofs that they  brought, also in earlier days they made it in the way they did it, and if so,  there was a melacha miDeoraissa like the  removing of the foreskin from a living creature. And we should refer to the Ben Ish Hai in his Sefer Ben Yehoyada on Bava Metzia 61a where it’s written based on the Kabbalah of the words of the ARIZ”L that the Sitra Achra has a hold on the color of Kala Ilan (and only with kosher Techeiles there isn’t “clinging “) and see where he elaborates on this.  If this is so, that in my opinion that this is Kala Ilan, there is a concern al pi Kabbala that one should not use this color which has this clinging of  the Sitra Achara! Besides the reason according to the Halacha that this isn’t the color  of  the corner, that if this isn’t Techeiles, we require Lechatchila that the Tzitzis are the color of the corner and we only make  white Tzitzis, as writes the Rema 9:5, even with other types of colored garments , and from this reason we are particular to make a Tallis only colored  white since we only make Tzitzis from white threads.

And, in essence, that which the supporters refute this, is because it’s not known any other creature, and therefore it must be the murex, but this means nothing  to anyone who knows anything, for they always finds things that they don’t know about beforehand , and specifically the Chilazon that already has been said it cannot be found today

Bottom-line, according to  my knowledge there’s more reason to be strict in not wearing the new Techeiles which comes from the “murex.”