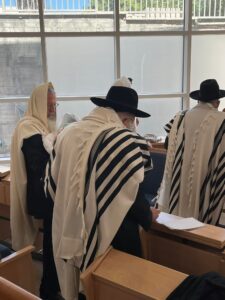 Granted he wore someone else’s Tallit Gadol only at a Bris, but this shows he isn’t against Techeiles.

Hans (Zvi Yisrael) Thau was born in Vienna to parents who had immigrated from Galicia at the end of the First World War. His father, Avraham Adolph Thau, was a banker, and his mother, Judith Yutah Meisels, was a chemist.[1] After the annexation of Austria to Nazi Germany (“Anschluss“), the family left for the Netherlands, and during the Holocaust, they were hidden by a local family in Hilversum. They were saved, among other things, due to his mother’s resourcefulness.

His sister Eveline related: “In June 1943, there was a large Aktion [round-up of Jews to be deported], and we were saved thanks to our mother, who was a chemist. She managed to disguise us as measles patients and hung a sign on the door: ‘Beware. Contagious disease’.”[2]

After the war, Thau studied in a public school, where he was exposed to philosophy. At the age of 17, after his mother’s death, he immigrated to Israel, despite his father’s objections, due to his refusal to complete a matriculation certificate prior to immigration. His father and sister visited the United States during this period.

After making aliyah, Thau studied at Yeshivat HaDarom under Rabbi Yehuda Amital. He related that Rabbi Amital introduced him into the world of Torah and the teachings of Rabbi Abraham Isaac Kook. The following year, Thau studied at Mercaz HaRav in Jerusalem.

Thau’s first wife, Chana, died in 2004. She was a pioneer of Torah study for women in the Orthodox community. At the age of 71, Thau married Batya Cohen, founder and clinical director of an outpatient clinic treating modern Orthodox and Haredi sufferers of eating disorders.[3]

Thau has three sons and a daughter. His eldest son, Rabbi Mordechai (Moti), heads the yeshiva high school “Shalom Banayich” in Jerusalem. His son Rabbi Nehemiah is a lecturer in the yeshiva in Mitzpe Ramon. Thau has two older sisters: Dr. Gerda Elata-Alster, a former professor of Comparative Literature at Ben-Gurion University; and Dr. Eveline Goodman-Thau, a professor of Jewish religious and intellectual history, who served one year as a liberal rabbi in Vienna.

From the 1960s, Thau held a position of influence at Yeshivat Mercaz HaRav. He is considered by many to be the leading disciple of Rabbi Zvi Yehuda Kook, the dean of Mercaz HaRav.[4]

In 1997, Thau opposed the introduction of an academic framework – plans to integrate a teaching institute – into Mercaz HaRav. As a result, he, together with six senior lecturers and many students, left the yeshiva and established the Har Hamor yeshiva. (The name “HaMoR” is also a Hebrew acronym for “Successor to Mercaz HaRav”.[5]) While he is not involved in Har Hamor’s day-to-day management, Thau is the ultimate authority on ideological matters.

While Thau’s authority on matters of ideology and policy amongst those affiliated with the movement associated with the right flank of Dati Leumi Israeli Jewry has remained unquestioned for many years, Rabbi Amiel Sternberg, the current dean of the Har Hamor yeshiva, is credited with positing that Rabbi Thau was mistaken in defending Chaim Walder, a Charedi psychologist and best-selling author convicted in religious court of sexual misconduct; he did not immediately retract his comments after criticizing Rabbi and noted rabbinical judge Shmuel Eliyahu and meeting with him to “smooth things over”.[6]

With regard to religious soldiers ordered to evacuate a settlement, he ruled that explicit refusal was out of the question, but soldiers would need to make it clear to their commanding officers that they “were incapable” of carrying out such an order.[5]