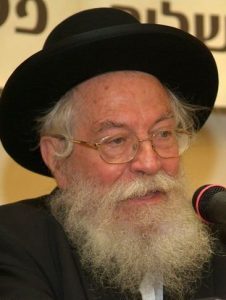 “Harav Zalman Nechemia Goldberg ZT”L was a son-in-law of the late Rav Shlomo Zalman Auerbach ZT”L, and is a leading Posek in Eretz Yisrael. He heads the Beis Din Hayashar Vehatov in Yerushalayim as well as the Yeshiva Sadigura. He is consulted by many prominent Rabbonim worldwide on matters of Gittin and Choshen Mishpat.”

R’ Goldberg felt that all strings and tying methods are good at this stage. That said, only his youngest son wears it and he told his kids that they don’t need to wear it (but he did – courtesy – R’ Nissan Kaplan https://www.youtube.com/watch?v=Tcy4xEam1-Q).

Rabbi Goldberg is a member of the Supreme Rabbinical Court (retired), Rosh Yeshiva of “Yeshivat Da’at Moshe” of Chasidut Sadigura and Rosh Yeshiva at “Machon Lev.” He has given a weekly shiur at “Eretz Hemdah” since its first day, is a member of the “Shut Bemareh Habazak Halacha Committee” and is the president of the Beit Din “Eretz Hemdah – Gazit.” Rabbi Goldberg is a descendent of a Lithuanian rabbinic family. In his youth, he learned in Yeshivat Chevron. He is married to the daughter of Rabbi Shlomo Zalman Auerbach. Rabbi Goldberg is known as a posek and gives shiurim to Torah scholars across the country, including at yeshivot in Judea and Samaria. In his rulings he demonstrates a vast knowledge in Gittin and Ketubot, in-vitro fertilization, intellectual property rights and settling the land of Israel. Rabbi Goldberg is known as ‘the Garzen’ (which has a double meaning, an acronym for the Gaon Rabbi Zalman Nechemia and as an expression of a great scholar with a sharp intellect). His books: * Chazon Kedumim and Ginzei HaTorah – shiurim on several Tractates. * ‘Mishpat Aruch’ – halachic rulings and methods of the Acharonim on the Shulchan Aruch, Choshen Mishpat (five volumes). *Publications in various Torah journals. *About Death – Q & A on the halachic aspects of treating terminally ill patients.