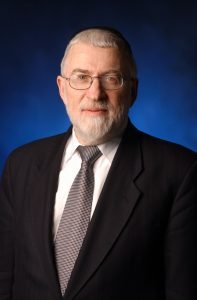 Rabbi Hershel Schachter is Rosh Hayeshiva of YU, one of the poskim of the Orthodox Union regarding Kashrus, and a former talmid of R’ Joseph Ber Soloveitchik (The Rav). He pre-ordered a set for as soon Ptil Tekhelet was in production.

R’ Schachter has tweaked his tzitzis numerous times. At the time of this post, his shitta is 7 winds of 7 separated by 8 double knots, with the first three winds and last three being white. The 7 winds is because the Gemara says “no less than 7 and no more than 13,” but didn’t say 7 or 13 of what, so he’s covered there. Besides, the Raavad held that way so that’s covered. Separating the chulyos is what the Rambam prescribed, and he does so with Rashi/Tosafos knots. The first and last three (as opposed to one) is most recently due to his learning Perek HaTecheiles with a 14 year old high school student at an NCSY event.

Details Regarding the Tying of Tekhelet