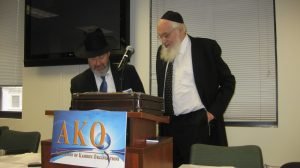 R’ Belsky ZT”L had a complicated relationship with Tekhelet. Ironically, while both he and R’ Schachter wore Techeiles, while working together for the OU, neither one influenced the other (R’ Hershel Schachter told me that if anything, if he told R’ Belsky one thing he would davka do the opposite – RH). R’ Eliyahu Tavger and his father-in-law R’ Eliyahu Kaufman brought it up initially. R’ Belsky had various questions but he still still supported the idea and encouraged others to wear. Then a kuntreiss call Beis Aharon V’Yisroel came out with a series of anti-Techeiles polemics which caused him to temporarily retract his stance. Yehoshua Yankelewitz then discussed the topic with him at length and clarified all the different points. R’ Belsky even asked Yankelewitz to tie his first Tallis Kottons with Techeiles.

He wore it on his regular Tzitzis when wearing a long frock coat to cover it, as well on his Shabbos Tallis. He didn’t like talking about it much and didn’t wear it on his weekday Tallis (though later on he was more vocal about it).

He was gifted a Shabbos Tallis with Techeiles but never wore that. He likely didn’t want to face negative backlash from the Haredi community and his affiliation with Torah Vodaas which has gone in “that direction.” This is nothing new: my father told me personally that in his time at Torah Vodaas in the mid-late 1970’s when people were starting to research it, the general attitude was that “this is nonsense.” R’ Yisroel Reisman, who is presently one of the Roshei Yeshiva at Torah Vodaas, has been vocal against it, saying there’s a “zero percent chance” that the murex is the techeiles source (which has been addressed by R’ Aryeh Leibowitz since that lecture). R’ Belsky also told his kids that they don’t need to wear it, and they don’t. Ask any Torah Vodaas alumnus in the last 10-15 years for confirmation on the above.

At the request of a friend’s son, I asked Rav Belsky about his approach to Techeiles. Rav Belsky told me, “It’s the real thing…there are Kama V’Kama Rayos…” When I asked him if he recommends wearing them, he said that, in general, he doesn’t tell people what do, and did not want to become the “public advocate” of Techeiles.

R’ Belsky held like Tosafos. R’ Yisroel Barkin, one of R’ Belsky’s nephews, explained that his uncle advised him on two things: two blue/white strings and 5 knots, nothing else. In terms of tying pattern, he explained that Ptil Tekhelet tied the strings for him in their default manner, the Chinuch method. R’ Yehoshua Yankelewitz explained that R’ Belsky had two reasons: