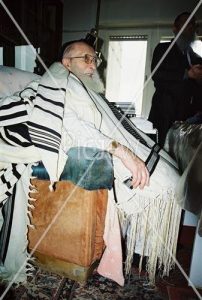 Evidently R’ Scheinberg ZT”L wanted to hedge his bets. With 100 pairs of Tzitzis being white at least one could have Tekhelet.

He wore at least one set of murex Techeiles (evidenced by the photo) and was advised that he wore one pair of Radzyn Techeiles. R’ Yisroel Rosenberg told me how he heard that R’ Scheinberg felt that unless it was disproven, there’s no reason why not to wear it, and if anything it’s a wonderful thing.

Re: Radzyn Techeiles, Reuven Prager Z”L claimed to have been the one to tie it for him. To quote a comment from him from the Techeiles Facebook group, dated October 27, 2021:

The first time I gave a set of techelet to HaRav Sheinberg Z”L his eyes lit up and he said “Techeles” with a big smile, and then his face changed and he turned to his gabbai with mamash fear in his eyes and asked “what would they say?” to which, in my astonishment I said “K’vod HaRav, this whole neighborhood looks upon you as one of today’s G’dolei Hador, if tomorrow you gave a psak that it was assur to eat apples 100,000 people in Mattesdorf and beyond would stop eating apples.” He replied to me, “You don’t understand – they’d call me Shabatai Tzvi – I’d have to leave Jerusalem!” I couldn’t believe my ears.

Reuven Prager yet he wore at least one pair of murex (based on a picture) and one pair of Radzyn (based on Mendel Singer and Yisroel Rosenberg). So maybe he changed his tune later on?

Please don’t misunderstand, he accepted the techelet (Radzin) from me on two occasions; one as an untied set (that first time described above) and one on a special Beged Ivri tunic I custom made for him. … The tunic story is quite a story as well.