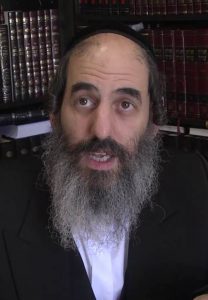 Rabbi Benzion Twerski represents the third generation of Rabbinic leadership at Congregation Beth Jehudah.  He strives to take classic Chassidic texts and teach them in a manner that makes them relevant to all who strive to connect with their teachings.  Rabbi Twerski’s sensitivity and probing intellect has allowed him to develop close relationships with his congregation and he is heavily sought after as a speaker throughout the country.

A big public advocate for Techeiles, R’ Bentzion wears it the following method: Yemenite Rambam Chulyos, one whole blue string, and Rashi knots separating in between. Someone mentioned this is the R’ Re’em method.

R’ Benzion Twerski Shlit”a at the same time talks about Shaatnez and Techeiles, and that nobody is stupid enough to do that since nobody is 100% sure that this is the right Techeiles.
Calling him up for clarification , I found that he was, on a scale of 0-100 safek-vadai on murex, in the 90s. Why not 100? He explained one account on what R’ Chaim Kanievsky said about not wearing Techeiles. That if he were to do so, some idiots will make a point proving R’ Chaim’s 100% correct by wearing it with Shaatnez! And he didn’t want to be the cause of such stupidity on a Torah prohibition. This is the only reason why R’ Twerski won’t say 100%, because that line of reasoning actually makes sense.
On one hand, Hashem isn’t destroying the sun because idiots worship/worshipped it, but on the other hand there are tons of Rabbinic Gezeiros made to protect the idiots among the group. Eilu V’Eilu.
He also wears it only on his Tallis Kotton but not his Tallis Gadol, out of respect to his father R’ Michel.