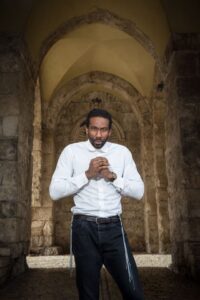 Amar’e Carsares Stoudemire (Hebrew: אמארה יהושפט סטודמאייר‎; /əˈmɑːreɪ ˈstɒdəmaɪər/; born November 16, 1982) is an American-Israeli professional basketball coach and former player. He serves as player development assistant for the Brooklyn Nets of the National Basketball Association (NBA). He won the NBA Rookie of the Year Award in 2003 with the Phoenix Suns, who selected him with the ninth overall pick of the 2002 NBA draft. He made six appearances in the NBA All-Star Game and was named to the All-NBA Team five times, including one first-team selection in 2007.

Stoudemire played high school basketball for three different schools, ultimately graduating from Cypress Creek High School in Orlando, Florida, and declaring for the NBA draft as a prep-to-pro player. He won several prep honors, including being selected as Florida’s Mr. Basketball. The highly athletic Stoudemire suffered from chronic knee problems during his career and underwent microfracture surgery on both knees. He played for the Suns, the New York Knicks, the Dallas Mavericks, and the Miami Heat before retiring from the NBA in 2016.

Stoudemire won a bronze medal with the United States national team at the 2004 Olympic Games. His off-court ventures include a record label, a clothing line, acting and a series of children’s books for Scholastic Press. In addition, Stoudemire owns a significant share of Hapoel Jerusalem, the team he won a championship with in 2017. He was the 2020 Israeli Basketball Premier League Finals MVP.

Stoudemire has four children with his wife, Alexis Welch. Having dated since 2002, the two were engaged in May 2012 and later married on December 12, 2012, atop their Greenwich Village apartment rooftop.

Stoudemire’s first name had previously been listed in the Phoenix Suns media guide as Amaré or Amare, but it was changed to Amar’e in October 2008. Stoudemire told NBA.com that his name had always been spelled Amar’e, but the media had been spelling it incorrectly since he joined the NBA.

Stoudemire was raised Baptist. Through his mother, he is associated with the Black Hebrew Israelites. In a 2010 interview, he said, “I have been aware since my youth that I am a Hebrew through my mother, and that is something that has played a subtle but important role in my development.” Asked if there was a chance he was Jewish, he said “I think through history, I think we all are”. He visited Israel that year, saying he intended “to get a better understanding of [his] heritage.” He returned for the 2013 Maccabiah Games as assistant coach of the Canadian basketball team; while there he met with Israeli president Shimon Peres, who urged him to join the Israel national basketball team. In April 2018, he reportedly began converting to Judaism. In January 2019, he was granted residency in Israel. In March 2019, he received Israeli citizenship, and adopted the name Jehoshaphat. He formally converted to Judaism with a Rabbinical court on August 26, 2020.

In the early morning hours of February 6, 2012, Stoudemire’s older brother, Hazell, was killed in a car accident in Polk County, Florida. He was not wearing a seat belt at the time of the crash.

In December 2014, Stoudemire purchased a 185-acre farm in historic Hyde Park, New York, which includes a 2,066-square-foot log home. Stoudemire has said that he intends to use the property as a place where his family can get together on weekends and in the off-season.