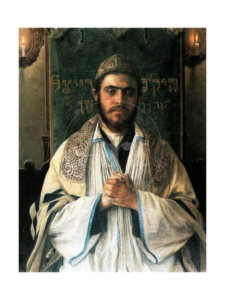 Summary: It seems that during the 19th and early 20th century dark blue stripes were standard both in the Western and Eastern Askenazi world (similar to the new Belzer tallit). Many Eastern European tallit factories (such as Sudlikov, dependent on the supply of materials from Lodz) also produced black stripes but this seems to be caused more by production issues (i.e. supply and cost) as opposed to halachic or hashkafic concerns. Light blue stripes were standard during this time among the Spanish-Portuguese and Italian Jews, as well as some Northern African communities.

The same sentiment was also presented by the early zionst activist from Lithuania, David Wolffsohn in 1897 as a well known fact: “What flag would we hang in the Congress Hall? Then an idea struck me. We have a flag—and it is blue and white. The talith (prayer shawl) with which we wrap ourselves when we pray: that is our symbol. Let us take this Talith from its bag and unroll it before the eyes of Israel and the eyes of all nations. So I ordered a blue and white flag with the Shield of David painted upon it. That is how the national flag, that flew over Congress Hall, came into being.”

See also the Pri Megadim (Eshel Avraham 9:6) for an explanation of blue stripes and much later Taamei HaMinhagim 15 for black ones.

Why are there lines on many tzitzis on taleisim begadim?

Peri Megadim (Eshel Avraham 9:6) writes that the custom was to have blue stripes on the talis, which came to remind one of the techeiles. The custom, however, is to have black stripes on the talis. This is possibly because the ink that the techeiles was made from was black (See Rambam, Tzitzis 2:8 and 2:2). Alternatively, it is so that people won’t think that this is actual techeiles.

Peri Megadim explains that although a talis should be the same color as the strings, the stripes do not constitute a problem, because we follow the principle color of the garment.

Tallitot stripes and the use of lines in clothes is an ancient Jewish style, found in archeological diggings from the time of Bayis Sheini . It may have originated from Yosef’s Ketonet Pasim. There was no uniform standard in Ashkenaz for the color of the stripes, and in Worms, the Baal Tefilla wore a colorful Tallis. Nevertheless, in most places all the Tallitot had black lines on white, so that one would not draw attention, since everyone had a similar garment for Tefillah.

Before Gezeiros Quf-Tet, according to Minhag Reinus, Bachurim generally wore a Tallis. (This practice was stopped most likely because of the poverty at that time, and the costliness).

“In the land of my birth in the Rhine, the older youths were also accustomed not to wear wrap themselves in Tzitzis until they married, based on a Drasha of Semuchim – the Pasuk of wearing Tzitzis  appears just before taking a wife.”
(The Maharil added this Bederech Drush. His Drasha could be an explanation for beginning to wear a Tallis after marriage, but definitely not a Halachic reason. The Chut Yair, Chasam Sofer and HaRav Shamshon Refael Hirsch restored the original Minhag of Bachurim wearing a Tallis once the economic situation improved in Germany (and all of Western Europe). That is why in our days this Minhag is practiced by all of Western European Jewry.)