<< Back to Archeology
See More 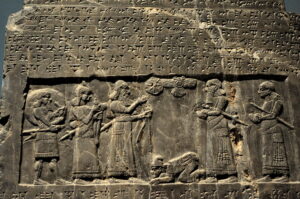 The Black Obelisk of Shalmaneser III is a black limestone Assyrian sculpture with many scenes in bas-relief and inscriptions. It comes from Nimrud (ancient Kalhu), in northern Iraq, and commemorates the deeds of King Shalmaneser III (reigned 858–824 BC). It is on display at the British Museum in London, and several other museums have cast replicas.

It is one of two complete Assyrian obelisks yet discovered, the other one being the much earlier White Obelisk of Ashurnasirpal I, and is historically significant because it is thought to display the earliest ancient depiction of a biblical figure – Jehu, King of Israel. The traditional identification of “Yaw” as Jehu has been questioned by some scholars, who proposed that the inscription refers to another king, Jehoram of Israel.[1][2] Its reference to Parsua is also the first known reference to the Persians.

Tribute offerings are shown being brought from identifiable regions and peoples. It was erected as a public monument in 825 BC at a time of civil war, in the central square of Nimrud. It was discovered by archaeologist Sir Austen Henry Layard in 1846 and is now in the British Museum.