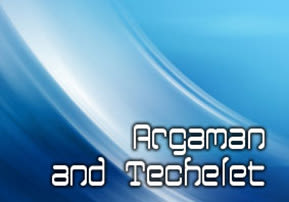 Archaeologists have uncovered numerous ancient dye-producing factories all over the Mediterranean coast, with large heaps of snail shells alongside them…

But which of the many species of snails is the one which produces the Techelet dye?

It was pointed out earlier that Techelet is often mentioned in conjunction with Argaman (-in fact, in the Talmudic literature, the term “Techelet” is often used to refer to either of the two). In the middle 17th century an English naturalist named Thomas Geig wrote that he found a snail which contains within it a liquid which becomes a purplish dye after being extracted from the snail and exposed to sunlight. At around the same time, someone named Saul Bochart (Hierozoicon, 1663) proved from ancient sources that Argaman was produced from snails. Shortly afterwards, researchers put the two facts together, concluding that Geig’s snail was indeed the source used by the ancients to produce Argaman (HaTechelet, p.252,371,418).

In fact, archaeologists have uncovered numerous ancient dye-producing factories all over the Mediterranean coast (mostly in the north-eastern area, “from Haifa to Tyre”), with large heaps of snail shells alongside them. These shells have been identified as belonging to three distinct species of snails: Purpura Haemastoma, Murex Brandaris and Murex Trunculus. That these snails were the source of Tyrian purple — Argaman — has become accepted as a historical fact. These snails are in fact much more numerous along the northern coast of Eretz Yisroel than along the southern coast, with their population steadily increasing as one goes north. South of Haifa, the snails are few and far between. This corresponds nicely with the description of the Chilazon’s distribution that is presented by Chazal.

The identities of these snails were well-known to Rav Herzog when he wrote his work on the topic of Techelet. And, as he himself pointed out, it seems clear from several Biblical and historical sources that the Jews and the gentiles extracted their blue dyes from the same creature (HaTechelet pp. 426-7. See also Shabbat 26a, and Rashi ad loc. “U’Lyogvim” -MK). Nevertheless, he rejected the idea that one or all of these species may be the true *Techelet* Chilazon for several reasons. First of all, the color of their shells is white, which contradicts the Gemara’s description (quoted above) that the Chilazon’s body “resembles the sea,” i.e. is of a bluish hue. Furthermore, and more importantly, the dye extracted from these creatures is purple in color, and not indigo. The above-mentioned snails were clearly the source of Argaman, or “purpura” in Latin. However, Techelet, referred to in Latin by Josephus and Philo as “hyakinthos,” may have been produced from another snail altogether!

R. Herzog suggested that there was indeed another snail, distinct from the above-mentioned snails, from which Techelet was derived. The snail he chose is known as Janthina Pallida Harvey. It is found in the Mediterranean, and has a beautiful violet-blue shell. When excited, it discharges a secretion of the same color. It is quite rare and lives in colonies that have population explosions every four to seven years, when large numbers of them are washed ashore! All the pieces of the puzzle seem to fit now! (HaTechelet, p.427.)

Over the last two years, serious research has been done to determine whether a blue dye can indeed be made from the Janthina’s secretion. So far, the efforts have not met with much success. The secretion can produce a reddish-bluish color on a fabric, but within a matter of hours the color turns black. Aside from that, the dye washes right out of the fabric when brought into contact with water. In fact, the most advanced modern testing has not been able to even dissolve the secretion in any chemical solution — the most basic requirement of any known dye. Instead of dissolving in liquid, the Janthina’s ink forms a suspension. In this state, it cannot be induced to bind to a fabric. More research into the chemical makeup of the secretion is still necessary.

Aside from this technical difficulty, there are several problems with identifying the Chilazon as the Janthina snail. For one thing, as with the cuttlefish, it is no more common along the shore of Zevulun than anywhere else in the Mediterranean. For another, as Rav Herzog himself points out, no Janthina shells have ever been discovered in any archaeological site, nor is it mentioned anywhere in the Greek or Roman literature that discuss blue dye. It thus appears not to have been in use in the ancient world.