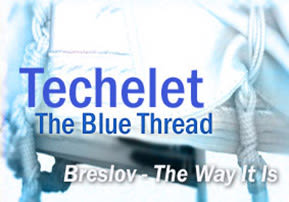 When the ‘inyan of techelet began to be debated during the late 1800s, due to the efforts of of Rabbi Gershon Henich Leiner, the Radzyner Rebbe, to restore this mitzvah…

Le‘ilui nishmat Leib ben Yitzchak Ya’akov Sears, a”h – Yartzeit: 30 Shevat, Rosh Chodesh Adar
Le’ilui nishmat Yosef ben Shmuel Zeitlin, a”h Yartzeit: 18 Menachem Av
We continue with our new series of minhagim and hanhagot tovot of Breslov. We invite you to peruse our previous entries by accessing our archives.
Techelet / The Blue Thread
When the ‘inyan of techelet began to be debated during the late 1800s, due to the efforts of Rabbi Gershon Henich Leiner, the Radzyner Rebbe, to restore this mitzvah, Rabbi Nachman Goldstein, the Tcheriner Rov, took the opposing view. He argued that Rebbe Nachman states in Likkutei Moharan I, 7, that tzitzit today are white. Reb Nosson reiterates this in Likkutei Halakhot, where he relates the wearing of techelet to the Final Redemption. Reb Avraham Sternhartz also rejected wearing techelet bi-zman ha-zeh, as did another prominent descendant of Reb Nosson, Reb Michel Sternhartz (son of Reb Yitzchak, to whom most of the letters in ‘Alim leTerufah are written). (Cf. Si’ach Sarfei Kodesh III, 338. As for the connections Reb Nosson makes between techeilet and le-atid lavo, see Likkutei Halakhot, Netilat Yadayim Shacharit 4:12; ibid. Tzitzit 1:1; ibid. Tzitzit 5:7. There are other mekorot, as well.)
* * *
Rabbi Gedaliah Kenig said in the name of Rabbi Avraham Sternhartz that the premature restoration of this custom could bring harsh judgments upon the world, since the blue thread is kabbalistically bound up with the forces of din (heard from Rabbi Elazar Kenig. See Likkutei Moharan I, 49:7, citing Zohar III, 152a).
* * *
Rabbi Gedaliah Kenig did not believe that the Radzyner techelet is authentic, but he contended that even if we had the true techelet, it would still be a sakanah (heard from Rabbi Dovid Shapiro).
* * *
However, Rabbi Gedalia Kenig once said that if one possessed impeccable yirat Shomayim − perfect fear of Heaven − he could wear techeilet (This remark also suggests why the mitzvah of techeilet may have been lost.) (Heard from Rabbi Elazar Kenig).
* * *
Rabbi Avraham b’Reb Nachman Chazan, author of Biur ha-Likkutim on Likkutei Moharan and other seforim, accepted the Radzyner techelet. Some say that he did so based on secret traditions from Rebbe Nachman’s Megillat Sesarim (“Hidden Scroll”) (Si’ach Sarfei Kodesh III, 559).
* * *
Therefore, today some Breslover Chassidim wear the techelet, while others do not. Moreover, there are differences between the Radzyner techelet and the techelet dyes developed more recently in Eretz Yisrael. One is made from the murex, the other from the jenthina, each shittah having its own advocates and critics. The custom of the Tzefat Breslover community is not to wear techelet, although we all hope to do so with the coming of Moshiach Tzidkeinu, speedily in our days.
Tefillin
Rebbe Nachman instructed his followers to don Tefillin of Rashi and Tefillin of Rabbenu Tam every day. Reb Nosson expounds on this in Likkutei Halakhot (Si’ach Sarfei Kodesh IV, 194; Likkutei Halakhot, Tefillin 5:27-32; ibid. 6:16; also see Shulchan Arukh, Orach Chaim 34:1-2; Pri Eitz Chaim, Sha’ar ha-Tefillin, 9. The differences between the shittot of Rashi and Rabbenu Tam, as well as Shemusha Raba and Ra’avad, are presented with diagrams in Rabbi Avraham Yitzchok Sperling’s Ta’amei ha-Mitzvot, p. 19)
* * *
Rabbi Elazar Kenig once remarked that wearing the Tefillin of Rabbenu Tam is also a shemirah, a way of evoking heavenly protection. This reflects Reb Nosson’s words in Likkutei Halakhot: “In these times, which are called ‘heels of the Moshiach,’ it is extremely important to wear the Tefillin of Rabbenu Tam, as all the true tzaddikim of our day have urged . . . Their holiness is elicited from the mochin (consciousness) of the great tzaddikim. Thus, we may receive strength from them to overcome the Evil Inclination that attacks us with even greater intensity in these final hours of our exile” (Likkutei Halakhot, Hilchot Tefillin 5:29).
* * *
An interesting historical note is found in the late Rabbi Yechezkel (“Chazkel”) Brod’s autobiography, Chassidic Light in the Soviet Darkness (HaChai: Brooklyn), p. 142, where he tells how as a yeshivah bachur, he asked the Rebbe RASHAB of Lubavitch for permission to put on the Tefillin of Rabbenu Tam in keeping with the wish of his father, Rabbi Chaim Binyamin Brod, who was a Breslover Chassid (at that time, Lubavitcher Chasidim did not begin to put on Rabbenu Tam’s Tefillin until they reached age twenty). The RASHAB assented, commenting that in this way Reb Yechezkel would fulfill two mitzvot: that of donning Rabbenu Tam’s Tefillin and that of kibud av.
To be continued…
(With permission from The Breslov Center for Spirituality and Inner Growth http://www.nachalnovea.com/breslovcenter)
You might also like
One of the following
TRUE BLUE
The History of Sapoon-Soap, The Benefits of Virgin Olive Oil
Techeilet – Mitzva World

Techeiles in the Torah – Number of Times